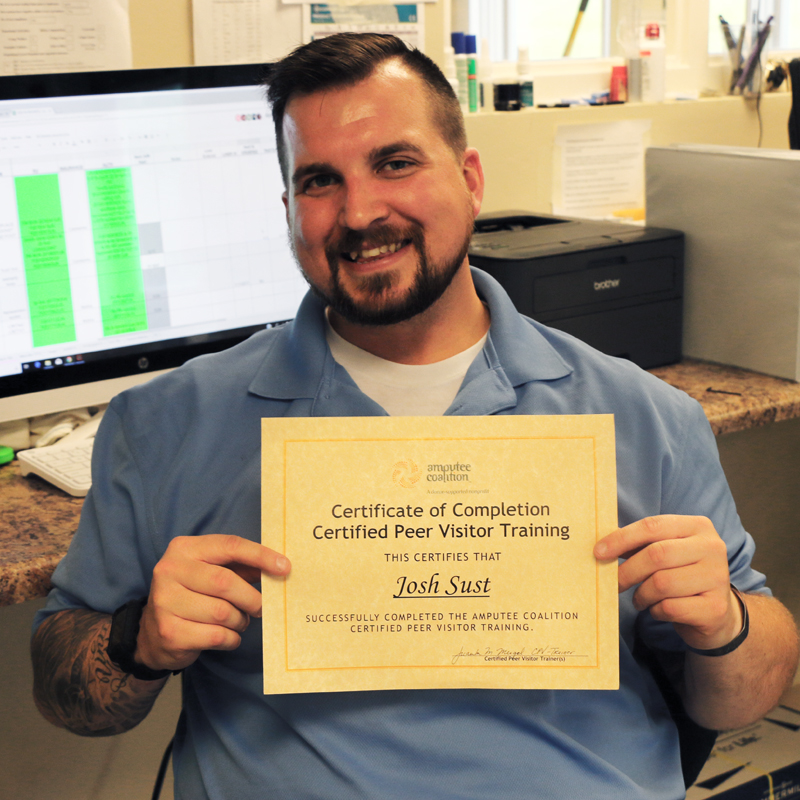 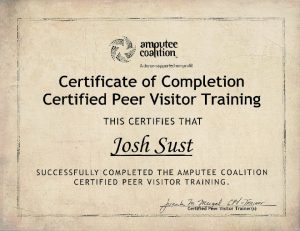 Abilities In Motion’s Josh Sust has completed the training to become a certified peer visitor through the Amputee Coalition. The mission of the Amputee Coalition is “To reach out and empower people affected by limb loss to achieve their full potential through education, support and advocacy, and to promote limb loss prevention*” 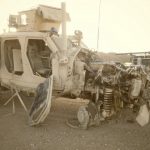 JOSH’S STORY: November 12, 2011 will forever be known as Corporal Joshua Sust’s Alive Day or the day he cheated death. On mounted patrol in Helmand Provence, Afghanistan, his unit encountered an Improvised Explosive Device (IED). Josh’s last memory that day was watching his helmet fly off his head, and he suffered major injuries to his left leg and arm.

After three years of constant pain in his leg, Josh went through an elective procedure to amputate his badly injured leg. He had been inspired by the examples of his fellow Marines that are enjoying active lives with below knee amputations. Josh’s relationship with Abilities In Motion began when he was fitted for an IPOP (Removable Immediate Post Operative Cast) by Tom Walsh. 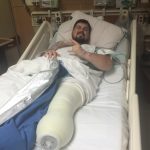 This device was key to his recovery because it allows the patient to keep his/her leg straight and protects the incision site.

On December 23, 2015, Josh received his new prosthesis, and he told the staff at Abilities In Motion, “It was the best Christmas present ever. Just being able to take that first step was an amazing feeling and accomplishment”. It was the start of a new life. 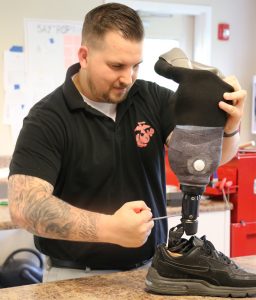 Josh’s enthusiasm and zest for life is contagious. Because he wants to continue to pay it forward, it was a natural move to make Josh a valuable member of the Abilities In Motion team. “Josh is able to speak to patients with an empathy and understanding that only someone with his experiences can express,” says Tom Walsh. “He is able to coach and inspire patients to keep moving forward”.

If you or someone you know could benefit from a visit with someone living with limb loss, contact our office today at (513) 245-0253.