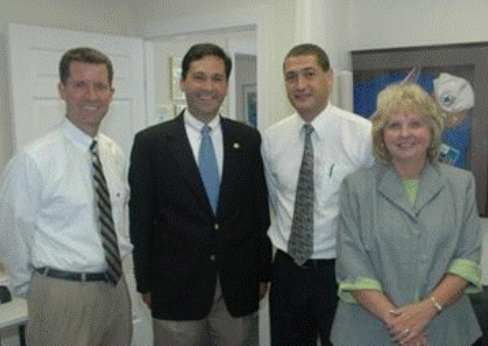 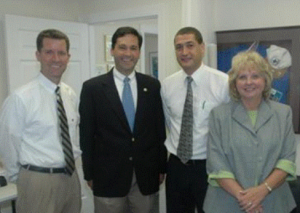 August 22nd, State Representative James Raussen, (R – Springdale) visited Abilities In Motion’s White Oak office to discuss insurance protection. Prosthetic insurance protection is a subject close to Tom’s heart. Tom is a leading figure in the drive to have Ohio State legislature pass a bill that would require ALL coverage of prosthetics to be equivalent to that of Medicare guidelines.

In recent years we have seen an increase in the number of healthcare plans that cap the funding for prosthetic devices. Some of theses caps are annual, some are for lifetime.

For example, some insurance companies have recently begun lifetime prosthetic benefit caps of $2,500 or have limited patients to one prosthesis per lifetime. Other insurers have annual caps as low as $500. 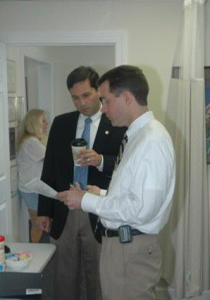 The effects of these caps can be devastating for patients trying to maintain productive, healthy and active lifestyles. Depending on activity level, health changes to the body and age, a lower limb prosthesis usually needs to be replaced every 2 to 5 years.

Some of the large insurance companies, namely Aetna and Anthem have announced changes starting 2007.

These changes will cap prosthetic devices annually at $2,500 in all states other than California, Colorado, New Hampshire and Maine. These states are exempted from the national prosthetic insurance benefit cuts because amputees and prosthetists already worked together to pass legislation in these states to ensure that insurance benefits include adequate coverage for prosthetics. This is the legislation that Tom is trying to get passed to protect the interests of the amputees of Ohio. Other states, New York, Connecticut, Massachusetts, New Jersey, Washington, Alabama and Louisiana have legislation pending.

Representative Raussen was a keen listener and expressed concern for our issues. He made some suggestions concerning how to achieve greater statewide recognition and recommended Health Saving Accounts (HSA) for those that can afford to save.

Amputees have not had vocal national organized advocacy groups that can lobby for their rights, until the Amputee Coalition of America (ACA) mobilized with a support system for regional efforts to pass legislation.

The Colorado legislation is estimated to add just 14 cents per month to the cost of insurance premiums to adequately cover prosthetics state wide.

Options for the disabled on Medicaid are getting worse. Texas for example, dropped Medicaid coverage of prosthetics completely. Other states such as Missouri are debating similar cuts. This seems foolish as Colorado’s figures have shown. The year after passing a law to insure prosthetic coverage for Medicaid, the state of Colorado saved almost $500,000 through decreased medical expenses. This did not even include the savings of getting people back to work and off Medicaid.

If you are interested in helping the push for legislation in Ohio, give us a call and we can help you with letters to state congressional and senate reps. The more support Tom gets from the amputee community in addition to the effort he is leading with his fellow prosthetists statewide, the greater the chance of change being effected.