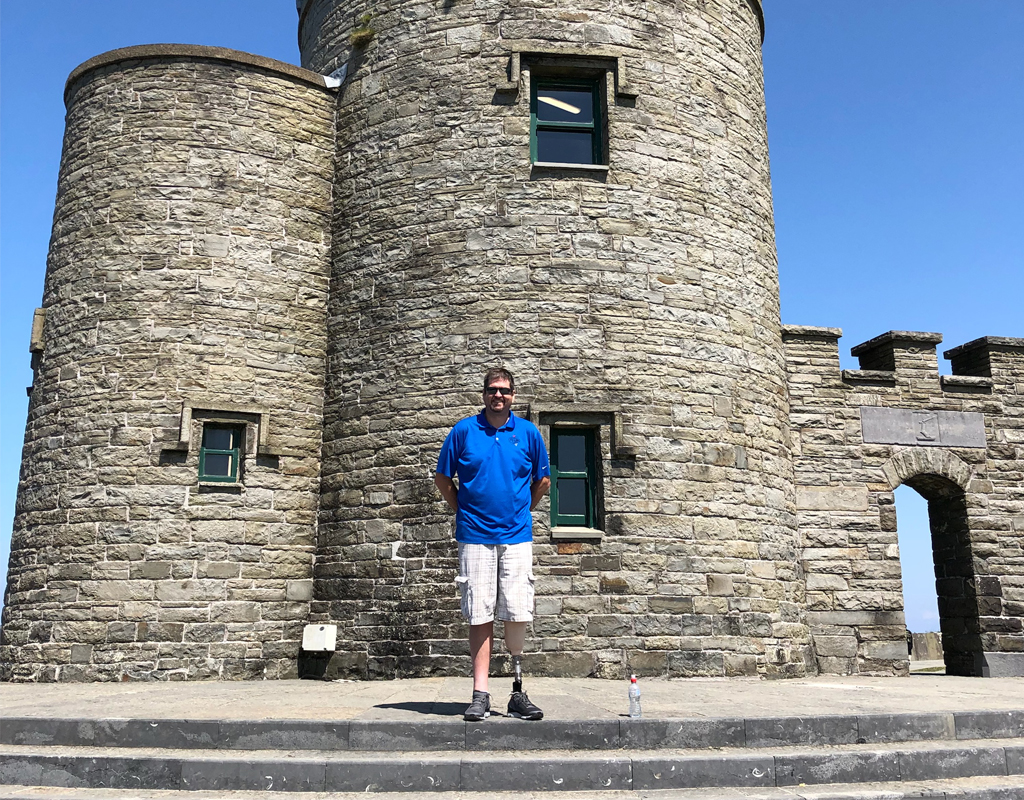 Brian Donnellan has always been active, but two years ago he was hit with the 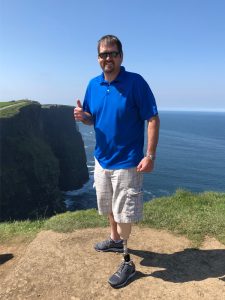 news that his leg would need to be amputated below the knee. Over the past two years he has been partnering with Abilities In Motion to achieve his goals of an active lifestyle.

This past month, Brian took a two week European trip with stops in Ireland and Italy. “This was the best trip ever, because I got to do everything that I wanted to do,” said Brian. He also shared some pro tips with us about traveling with a prosthesis: 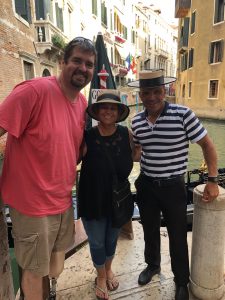 During his trip, Brian was able to enjoy the Cliffs of Moher. “I felt comfortable the entire time. My wife was a little concerned that I was standing on a 1,000 foot cliff, but it was easy,” says Brian. He was also able to walk though the Coliseum in Rome and walked for miles on his trip.

“I just proved to myself that I can do whatever I want to do, and nothing is holding me back now.”

Please note, the information contained in this post is based on this individual’s experience. Individual situations vary. We recommend that you do your own research to fully comply with TSA and airline policies and restrictions.

*Swim Leg: Standard prosthetic legs are not able to be exposed to water because of some components are not waterproof. Swim legs are designed for swimming, bathing and other aquatic activities. They are typically not covered by insurance, but Abilities In Motion works to help accommodate patients with affordable solutions when necessary.

Abilities In Motion is always seeking new and innovative ways to meet the needs of our patients… including athletes. www.abilitiesinmotion.com

Before losing his leg in a vehicle accident, Scott Lane ran marathons. Abilities In Motion working to equip him for his next race and his active lifestyle.

“We’ve seen Scott over the years, so we know what works for him. We give him the latest running feet to trial and he picks the one that he likes.”

Scott’s prosthesis was fit with a custom cover printed in our lab on our 3D printer. Innovation is a core value at Abilities In Motion as we continue equiping athletes with cutting edge prosthetic legs.

We have two locations. Our main office is a state-of-the-art facility at 11151 Kenwood Road, Cincinnati, Ohio. Our second facility, which is located at 5701 Cheviot Road in Cincinnati, Ohio, was opened by Thomas L. Walsh, CPO, LPO, FAAOP in August of 1995 to serve the greater Cincinnati, southeastern Indiana, and northern Kentucky areas.

Abilities In Motion is an ABC accredited Prosthetic facility.

Rodney Jones first came to Abilities In Motion in the summer of 2013. A truck driver for several years, Rodney was injured while on the job. After several failed attempts to reset his leg for healing, the decision was made to amputate Rodney’s left leg.

Rodney worked incredibly hard over the past 1.5 years to get to this place in his life. When Rodney started coming to AIM, Rodney also started working with Premier Physical Therapy (AIM’s inhouse PT). By coming in multiple times each week, Rodney has progressed from using a wheelchair, to parallel bars, to a walker, to a cane and finally has reached unassisted walking. The AIM and Premier teams are extremely proud of Rodney’s progress.

Rodney’s work-related injury forced him to live a very sedentary lifestyle before his amputation.

Though it took a good attitude and a lot of effort, Rodney is now 196 pounds lighter and living the life that he wants to live.

Recently, Rodney started driving by himself again. He has loved being able to regain the independence that he has lacked for so long. Along with AIM’s prosthetic care services and Premier’s physical therapy services, Rodney’s positive attitude has helped him come this far. To him, the amputation was just a “little speed bump” and he finds it important to have fun even in the midst of challenging times. Whether he is driving himself to the hardware store or riding his bike around the neighborhood, it is evident that Rodney is moving forward.

As a part of the rehabilitation process, Rodney initially used a prosthesis with a locking knee for 12 months. He then transitioned into using the technologically advanced Orion2 knee from Endolite.

This microprocessor controlled knee unit uses Motion Integrated Intelligence (Mi2), which allows Rodney to feel more secure ashe stands, rides his bike, and walks. This knee can lock at various angles and features progressive speed control. Also,the sensors within the knee allow for Rodney to walk up ramps and hills with more security.

These components have allowed Rodney to progress from initially using a walker to now walking unassisted at variable walking speeds and negotiating ramps and stairs.

Gerald Evans is a basketball man. Simply put, he loves the sport. A keen player for many years, Gerald has been talking about it since we first met him.

Gerald has been playing basketball all his life, starting with playing on youth teams. He also played for Woodward High School and started as a center.

In his college years, Gerald continued to play ball. He started for two years as a forward for Cincinnati State University.

He went on to play many years of pick up games after he finished college. Gerald would often play several times a week.

When we began his rehabilitation from his amputation, basketball was always part of the conversation.

At first he would joke about getting his jump shot back. This was when he was getting measured for his first prosthesis.

After fitting him with his initial prosthesis which included a highly efficient energy storing foot, Gerald quickly transitioned to a cane, then walking without assistance in just a couple of months.

Gerald keeps himself in shape at home using a treadmill, which he uses daily.

More recently, he was fit with an elevated vacuum system, which provides greater control of the prosthesis. This system has really helped Gerald on the court. He has been working hard with the new prosthesis on perfecting his jump shot. He told us that the new system has really helped with the control needed to jog around the court and to jump in the air without having to worry about the landing.

So with the jump shot now perfected, there is just the matter of working on the slam dunk!

When we asked Gerald if this was a goal of his, he replied,

“It’s been many years since I last did that! Maybe it’s something to look forward to, but not today.”

Keep up the great work Gerald. Once you get that slam dunk down, you’ll be ready to play a little one on one against Tom!

Although most people know about Social Security retirement benefits, far fewer know that people with disabilities—those who can no longer work because of injury or illness—may also qualify for Social Security benefits, regardless of their age. The process of obtaining such benefits can be confusing and as a result there are many misunderstandings. Here are a couple of myths explained from the inMotion Magazine May Edition.

1. If I am disabled, it is easy to obtain disability benefits.
Actually it can be a difficult and frustrating procedure. Initially you must be interviewed either in person or via phone. The majority of applicants are turned down upon initial application. However chances of approval increase when you file an appeal, which can take differing forms in each state.