Bob Haggard serves as an active reserve in the US Army. As a typi- cal 23 year old, he enjoys many high energy, outdoor activities such as cycling and running. 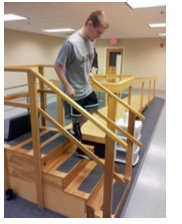 In January of 2012, Bob was involved in an automobile acci- dent. Due to his accident Bob had his right knee fused in slight flexion.

This caused difficulty sitting in tight spaces, such as bleachers at sporting events. He has had multiple surgeries to his elbows, as well as amputa- tions of fingers and thumb of his right hand. Bob continued to have pain in his left knee and limited range of motion in his left ankle.

In April of 2013, Bob decided to undergo an above knee amputation on his right leg. This was a big decision, but one that he felt was right for him. On June 6, 2013 we fitted Bob with his above the knee prosthesis.

Bob’s rehab has gone very well. He quickly learned to walk without assistance. With his youth, strength and agility working in his favor, he even taught himself to run. 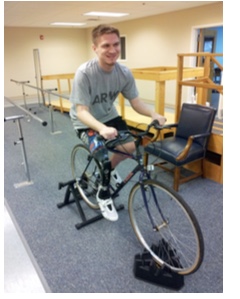 Bob’s next goal is to be able to cycle. As seen in the photo, he has converted his bike into a stationary unit. This allows him to learn how to

balance and pe- dal safely before hitting the trails.

His prosthetic knee has the option of turning off the stance resistance and functioning in a free swinging mode.

We can certainly say as far as Bob is concerned, he is definitely moving forward!