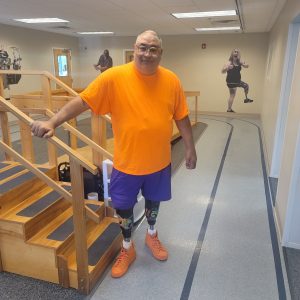 Abilities in Motion patient, Dwayne, spends hours a day rehearsing on stage. As a director as well as an actor, he has to be on his feet for hours at a time. This is incredibly challenging with his bilateral below knee prosthetics. Amputees use more energy to walk than able bodied individuals, meaning Dwayne’s body has to work harder to keep him active. On average, a below knee amputee will use 16-33% more energy than an able bodied individual, and an above knee amputee will use up to 65% more energy. Dwayne has to be constantly aware of how his prosthetic legs are fitting, if he needs any socks, and how well his strength is holding up. At the same time, he is building stamina to make it through the full show.

As we all know, being mobile as an amputee, even with a good fitting prosthesis, requires a lot of energy. To accommodate his needs, Dwayne makes sure there is always somewhere for him to sit and take a break. Places to sit have been integrated into the set as well. Dwayne also ensures that prior to rehearsal, he is resting to save his strength. His biggest goal is to have enough endurance for the entire performance and then some.

This theme of ‘endurance’ is common for people with disabilities. We have to create boundaries for ourselves in order to make sure we have the energy to get through our day with as little pain and as few barriers as possible. Dwayne accomplishes this by resting and staying off of his legs before rehearsal.

I will be anxiously waiting to see how Dwayne chooses to incorporate his story into his acting. Dwayne is the perfect representation of someone who continues to do what he loves despite limitations in his mobility due to amputation. You can do the same! Keep doing what you love. You may just need a few modifications.