Abilities in Motion patients, Angie and Alicia, are both taking the leap to embrace a prosthetic device.

Alicia is a new amputee, but has been extremely limited in her mobility since her stroke over four years ago. Simultaneously, she is familiar with the challenges of life as an amputee, as her son became a below knee amputee as a toddler after a lawn mower accident. Alicia has a goal to be able to stand and walk short distances. With the help of a prosthesis and hard work, Alicia is determined to meet that goal. 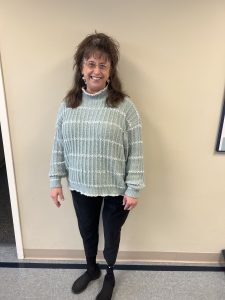 Angie has been an AK amputee for nearly 30 years. Until three years ago, she was a daily prosthesis user. After several rough falls due to an ill-fitting prosthesis made in another facility, Angie developed an intense fear of falling that took time to overcome. Now that she’s ready, Angie has been fit with a new prosthesis at Abilities in Motion.

Angie states that her decision to walk again was gradual. It took time for her to understand that the biggest reason she was falling was an ill-fitting prosthesis. She attained the mindset that utilizing a prosthesis would make her life easier. To make the leap, she started physical therapy to work up her strength, and knew she needed to be fit for a new socket. With the help of Abilities in Motion, Angie is on her way to once again wearing a prosthetic daily.

She is pictured here with her new prosthetic!